Our Christmas highlight this year will be a new venture for us with a Concert of Christmas Carols and Songs at our rehearsal venue St.John the Baptist, Church St, Pewsey SN9 5DL on the evening of Friday 13th December. We will be complimented by the folk and blues excellence of the Crofton Stokers with our audience sat at candlelit tables to enjoy a buffet of seasonal fare.

Ticket sales through our Supporters' Mailing List have been very strong and any remaining tickets will be placed with the public outlets on Tues 19th Nov.
Posted by Ted the Blog at 10:07

Sound Us Out at Pewsey Carnival ...

Pewsey MVC is as keen as ever to welcome new voices and now is no different. This is your chance to help us build on the success of our Voices of Our Vale concert in early July - we have never had so much positive feedback from the audience and this sent us off into our usual August recess in buoyant spirits.

We clear our throats with a visit to Oare & District Show on 31st August. Then September, always a good time for newcomers to join up and this year we have organised a special "Come And Try It" style evening as part of the annual Pewsey Carnival fortnight on Monday 9th Sept at St.Johns, Church St, Pewsey at 7:15pm. We have called this Sound Us Out! - see posters below, all free, just come along and enjoy and/or email us pewseymvc06[at]gmail.com for further info ... 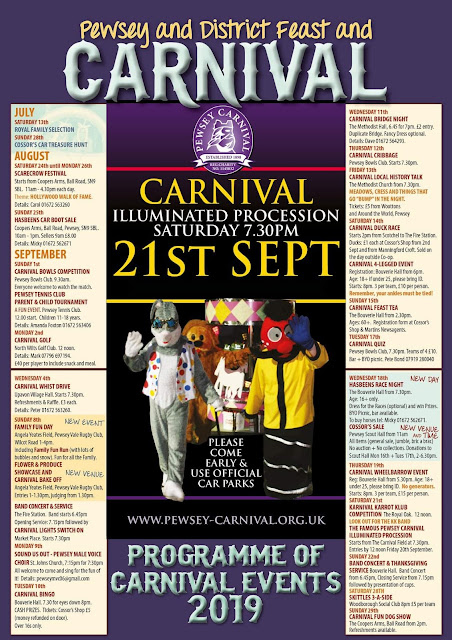 Now that we have had a chance to get to know our new Choral Director Graham Coatman and (more importantly!) he us, we thought it high time we staged an evening of song in the Bouverie Hall to show Pewsey what had become of us since the New Year.

We have invited the delightful Pewsey Belles Ladies Choir to concert with us under the direction of Ed Cooke and happily they have agreed.

So the scene is now set for Saturday 6th July, with doors opening at 7:00pm for a full programme of entertainment starting at 7:30pm. There will be a cash bar and tombola style prize draw and we hope to see a full house of supporters old and new enjoying the Voices of Our Vale!
Posted by Ted the Blog at 20:29

We know how to enjoy our time off! As required by General Data Protection Regulations (GDPR)  we have just given our Contacts List built up over 12yrs a bit of a Spring-clean and have mailed out to non-members asking those who want us to stay in touch to confirm. You may have received such a request in which case thanks for any response. Otherwise, please feel free to sign up to our Supporter Mailing List on the Support Us! page.
Whilst we shall try to keep our social media presence relevant, the signal to noise ratio on Twitter/FB can be a bit low sometimes (especially when elections loom) so the mailing list is seen as the best way of staying in touch with the greatest number of people who are most interested in what we do, e.g. details of upcoming engagements, especially public concerts, etc.
Posted by Ted the Blog at 11:42

We were proud and pleased to be invited by BBC Wiltshire to help them celebrate their 30th birthday today. For those who didn't get to hear it in real time, our rendition of "Happy Birthday To You" was played twice, first at 6:00 am on the Ben Prater show and again at 3 mins 30 secs into the Graham Rogers Show at 4:00 pm as you can hear here (BBC Sounds) or here (MP3)

Many thanks to Graham Coatman for his great arrangement which we thought sounded fantastic!

Here's a few photos of the recording session courtesy of Michele Jenner... 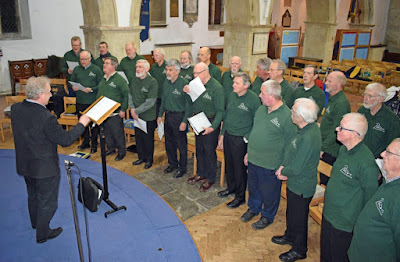 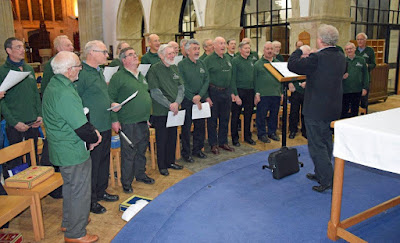 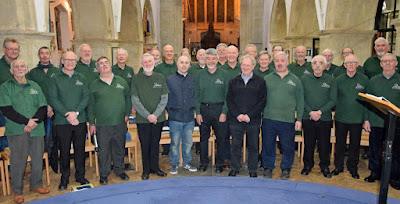 Welcome to Our New Choral Director!

Pewsey Male Voice Choir were delighted by the quality of the candidates who came forward in response to our vacancy for a new Choral Director and are delighted to announce the appointment of Graham Coatman to the role. Having moved from Yorkshire to Wiltshire for family reasons just over a year ago, Graham is looking to build on his impressive CV with a new portfolio of choirs in our area and we look forward to making a start with him on Mon 4th Feb.
Posted by Ted the Blog at 13:29

Happy 2019 to all our members, supporters and followers as we embark upon the next chapter of our story ... appointing a new Choral Director ... whilst this will be the focus in January we remain a non-audition choir so if joining in the fun of singing is part of your New Year's Resolution you're assured a warm welcome: Mondays (14th Jan onwards), 7:15-9:00pm St.Johns, Church St, Pewsey.
Posted by Ted the Blog at 18:18

Merry Christmas and a Happy New Year!
Check out our Gallery to see what we've been up to. 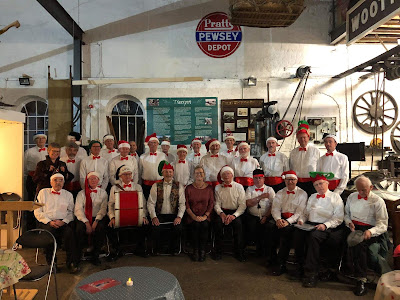 Below you'll see details of our upcoming engagements at Pewsey Fire Station and the Heritage Centre. We are also doing Netheravon Phoenix Hall on Tues 11th, 11:00 am, Carols for Commuters at 7:00am on Mon 17th at Pewsey Railway Station and finally supporting the carol service at St.John's on Thurs 20th, 6:30pm. Happy Christmas all. 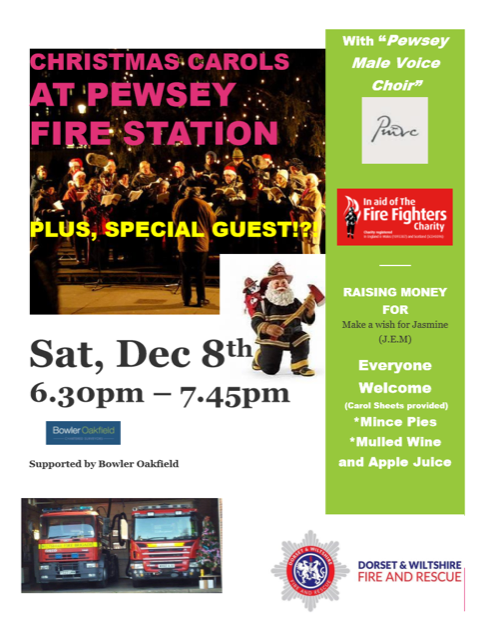 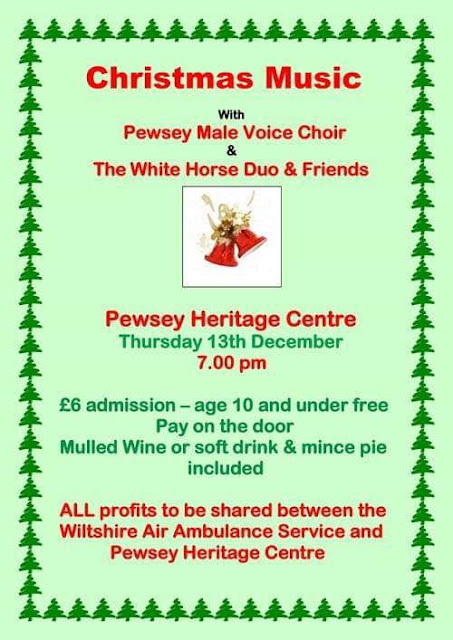 So far November has proved to be a hectic, harrowing month for Pewsey Male Voice Choir.

We already knew that our Choral Director of the past five years or so Daryl Taylor needed to stand down in order to fulfil travelling ambitions in retirement. We wish him all the best and have set the ball rolling to find his successor. Next we learned of the passing of long-standing members, firstly, Second Tenor Bernard Gaskin from Manningford and then, poignantly on Remembrance Sunday as we sang at Milton Lilbourne, our former Chairman, current Social Secretary and stalwart Bass 2 John Marshall. Our heartfelt condolences to the families of both our good friends. 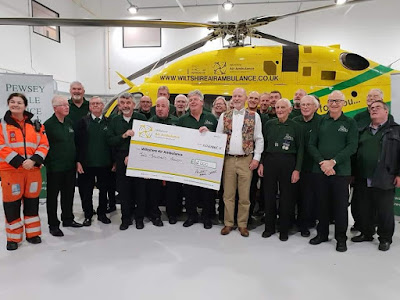 Appropriately enough some uplift was provided on the night of Tues 13th when a sizeable contigent of members and supporters went over to the Wiltshire Air Ambulance HQ at Semington to serenade the helicopter, fundraising staff and aircrew whilst handing over a cheque for £2,000 (being the sum we have raised for the service this year).
Posted by Ted the Blog at 16:14

When the Clocks Go back we Switch the Attack ...

With a comparatively busy September and October now behind us thoughts now turn to the Christmas programme and, as usual, learning a couple of new songs to keep things fresh. But before that November will see us helping Milton Lilbourne to mark Remembrance Sunday, paying a visit to the Wilts Air Ambulance HQ to present our fundraising cheque and pitching in at St Johns' Medieval Christmas Fayre.
As ever, new voices are always welcome: St Johns, Church St, Pewsey - Modays 7:00pm for 7:30pm.
Posted by Pewsey MVC at 10:26